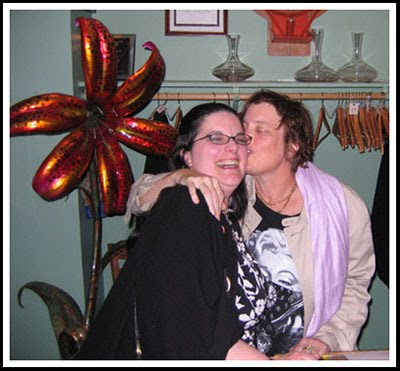 She's actually inviting me to turn around and get uninhibited by the spore flower from "This Side of Paradise", Star Trek TOS FTW!!!

Okay the truth. I found out that Susie Bright was going to be on book tour in Chicago and then next up in St. Louis, and that she would hafta drive right through our proverbial cornfield to get from one to the next. Driftglass drove her down from Chicago (Yeah he could just retire from blogging now but I won't let him.)  and we put her up for the night and fed her. This is at Augie's Front Burner, a local restaurant that I chose.

It was so funny because Susie spent the time before dinner looking up restaurants on Yelp and cracked up about ponyshoes. For those of you unfamiliar a ponyshoe is a smaller version of a horseshoe, which is a local dish consisting of an open-faced sammich consisting of...


If you see Jesus in the cheese sauce, call your server back to the table and also have the chef come out and share the blessing.

Susie thought the idea of ponyshoes was a hoot.