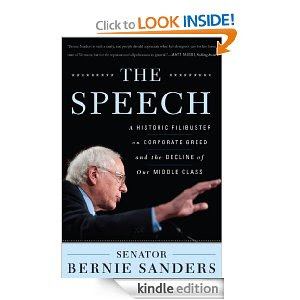 Because, no, really, the last time a LIBERAL did it, and guess what, Chuck? You can buy the written (yes, written, NOT transcribed) text of the speech, all eight hours of it, for your KINDLE.

I sure hope Regnery Press has exclusive! plans for the entire text of Rand Paul's remarks. Not just the 30% right part, but the 70% crazy part, too.

"I joked with a White House staffer earlier that day, I`m like, hey, are you going to give us anything on this Clinton-Obama meeting because other than that, I've got about eight hours of Bernie Sanders tape to start running on-air, you know, sort of half joking.

And then, you know, they bring out the big dog, Elvis comes into the building, and guess what, Bernie Sanders, his show ended up getting put on page four," White House correspondent Chuck Todd said on MSNBC.