That Carl Jung cracks me up. 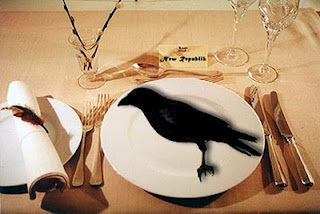 Yes, honey, I'll have the crow.

A friend sent me "the test," which I took, and apparently I'm (shock)

INFPs, more than other iNtuitive Feeling types, are focused on making the world a better place for people. Their primary goal is to find out their meaning in life. What is their purpose? How can they best serve humanity in their lives? They are idealists and perfectionists, who drive themselves hard in their quest for achieving the goals they have identified for themselves.

The INFP is driven to help people and make the world a better place.

INFPs are flexible and laid-back, until one of their values is violated. In the face of their value system being threatened, INFPs can become aggressive defenders, fighting passionately for their cause.

When it comes to the mundane details of life maintenance, INFPs are typically completely unaware of such things. They might go for long periods without noticing a stain on the carpet, but carefully and meticulously brush a speck of dust off of their project booklet. [or photoshop pixel?]

INFPs have very high standards and are perfectionists. Consequently, they are usually hard on themselves, and don't give themselves enough credit. [Okay honey, I get it I get it.]

INFPs are usually talented writers. They may be awkard and uncomfortable with expressing themselves verbally, but have a wonderful ability to define and express what they're feeling on paper. INFPs also appear frequently in social service professions, such as counselling or teaching. They are at their best in situations where they're working towards the public good, and in which they don't need to use hard logic.

INFPs who function in their well-developed sides can accomplish great and wonderful things, which they will rarely give themselves credit for. [YES, DEAR.] Some of the great, humanistic catalysts in the world have been INFPs.