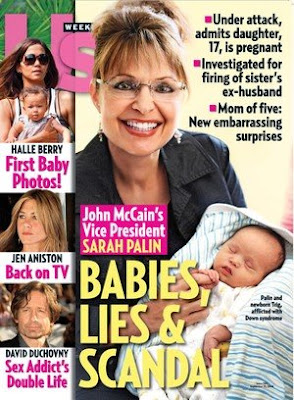 "I feel sorrow for the Tiller family. I respect the sanctity of life and the tragedy that took place today in Kansas clearly violates respect for life. This murder also damages the positive message of life, for the unborn, and for those living. Ask yourself, 'What will those who have not yet decided personally where they stand on this issue take away from today's event in Kansas?'

Regardless of my strong objection to Dr. Tiller's abortion practices, violence is never an answer in advancing the pro-life message."

OMG I have to defend Sarah Palin?

I think this statement is right on the mark. Yesterday was the absolute worst day for the pro-life movement. They can't take the moral high ground with calculated murder in a church going on on their behalf. And holier than thou moral high ground is the one thing pro-lifers have going for them when looking for votes but more importantly, dollars. Pro-life is the biggest cash cow the Right has, and this hurts their wallet, you betcha.

She's delusional that there's anyone of any mental consequence who hasn't made up their minds on the abortion issue though. I think young women take choice for granted a bit much, but then again so do their baptist church-going parents when their daughter Missy makes a mistake with some football player.

"The Center For Reason, a private research group, undertook a study to test the premise: “Christians have fewer abortions than non-Christians”. The results disproved the premise.

The study, available as a downloadable report, reveals that Christians have just as many abortions as non-Christians. Data analyzed for all fifty states show that the rate of abortion is the same in the most-Christian segments of the population as it is in the least-Christian. The most-Catholic segments, on the other hand, showed significantly higher abortion rates."

The Tiller murder has already started a serious re-framing of abortion as an issue first and foremost about women's physical health. The testimonies coming out of vigils for Tiller are primarily about how the health of his patients was always Tiller's main concern and motivation.

I pray some good comes out of this horrible crime, and that the non-murdering majority of pro-life citizens wake up to the consequences of their agenda.
permalink 4:40 PM