I'm sorry, Mister Orwell has turned off his pager.

We need a corrolary to Godwin's Law of Nazi analogies, related to bringing up George Orwell every time some so-called 'journalist' uses language to push a right-wing political agenda.

It's just too cheap and easy for Lefty bloggers to use Animal Farm to write about this stuff, but still, I've had two powerful examples of Right Wing Corporate Media Wackitude thrown at me in the past 24 hours. This morning this new MSNBC Morning Joe followup dickwad Dylan Ratigan, renames President Kennedy's Executive Order 10925 (sorry to be so specific, Dylan).

You have to watch this to believe it. Dylan Ratigan uses his newfound MSNBC podium to rename Affirmative Action, reverse racism. How very Rush of you, Mister Ratigan.

But ahem, I'm impressed that the black guy and the Hispanic woman on your show had training on how to stay civil on the air, I would not have waited 'til almost commercial break to whisper "you're a dick" to your face. Notice they also set you straight on your nomenclature.

Watching Dylan Ratigan I initially thought, God, this guy's background must be either former NFL sportscaster or a big bizness fluffer from CNBC. But after a few minutes you could smell his Wall Street smegma-breath through the screen: he's a co-creator of the Dow Industrial Whore House "Fast Money." Nuff said.

The other example is from perhaps the worst article on paper I have ever read. Time Magazine's two-pager on "An Enduring New Deal: A look at how FDR's programs have shaped today's society." I usually wouldn't waste the scroll down space on naming the authors of this travesty, but Eric Dodds and Rebecca Kaplan deserve a piece of Orwell pie with two forks for this utter crapola.

Instead of pointing out that what the New Deal did, germane to, um, TODAY, is regulate unchecked capitalism, this 'article' uses one sentence word salad bites to indicate just how different everything is today. The most glaring example is here:

With baby boomers approaching retirement, the Social Security trust fund is running low. Obama's challenge: to maintain an overburdened system without privatizing it.

Somehow I don't think President Obama, or anyone else with the political will to not get bulldozed out of office by every voter over the age of 40, is thinking about the Bush 'privatization of Social Security' model. I can just as easily see Obama suggesting we give the problem to Bernie Madoff so he'll have something to do in prison.

Gee, with journalism like Time Magazine, doncha just wonder why 'journalists' get huffy when bloggers call them on their bullshit? 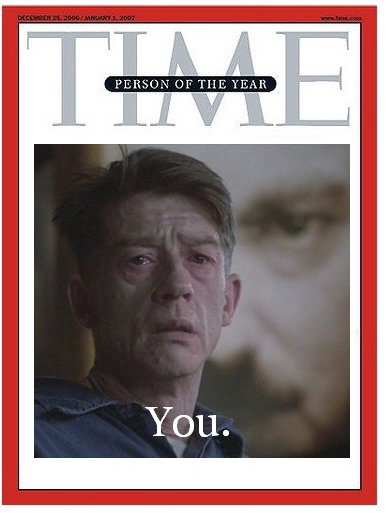