I'm shocked, shocked I tell you! 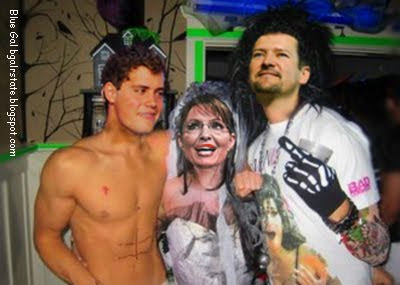 To discover that within the privacy of their own home, Mr and ex-Governor Palin comport themselves as small-minded, self-centered, foul-mouthed White Trash.

In whatever remains of Palin’s inner circle, however, most people are following orders. Some details of the Palins’ private life, however, suggest a reality at odds with Sarah’s image.

One person who has been a frequent houseguest of the Palins’ says that the couple began many mornings with screaming fights, a fusillade of curses: “ ‘Fuck you,’ ‘Fuck this,’ ‘You lazy piece of shit.’ ‘You’re fuckin’ lucky to have me,’ Sarah would always say.”

Sometimes the children rebelled. A campaign aide remembers that one of the Palin children found her mother’s public displays of piety especially grating. Though Palin prayed and read the Bible every night, aides never saw the family join her for devotionals. “You’re just putting on a show. You’re so fake,” one of the children said when Palin made a point of praying in front of other people. “This is not who you are. Why are you pretending to be something you’re not?”

Email ThisBlogThis!Share to TwitterShare to FacebookShare to Pinterest
Labels: "Sarah Palin is such a goddamn fuckwad", photoshops