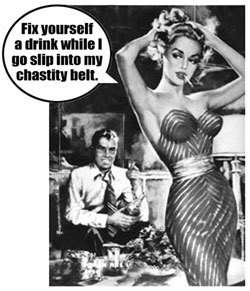 Lauren Slater's essay in the Sunday NY Times made me sad and angry at the same time. The author is a woman who has had both cancer and depression and makes the case that her dislike for sex is not pathological, it's just the way she is. Her story is told in that "Modern Love" column self-awareness prose that makes Oprah say "love that!"

And sadly, it's perfectly okay for women to not enjoy sex, too. A man who found he couldn't or wouldn't perform would be judged as having something wrong, and handed a bucket of little blue pills to "fix" him, wouldn't he?

She felt it necessary to lie that she was recovering from being raped in order to delay her introduction to sexual activity? But she's not pathological? Wow. I just told men I was a virgin and wanted to stay that way. Worked for me until I decided it didn't, which was in my later '20s. Am I the pathological one, then?

I don't feel any particular urge (heh) to fix Lauren Slater, though if I were her husband, her act of celebrating her non-pathological aversion to my sexual touch in the pages of the New York Frackin' Times, would be grounds for divorce.

No one, male or female, HAS to enjoy sex. And the public message that we all have to be sexy and sexual (yes, particularly women) in order to be of value, is a curse we can't seem to undo.

But I feel sorry for Lauren. Bit of an understatement that sex with someone you love and who loves you is really really fun.
permalink 4:38 AM

Email ThisBlogThis!Share to TwitterShare to FacebookShare to Pinterest
Labels: sex