Ya know, sometimes things really do work out for the best.

It's probably for the best that World Net Daily dis-invited Ann Coulter from attending their "Take Back America" Conference because she's appealing to her tranny base by speaking at GOProud's "Homocon" (and before you attack me for insensitivity to cross-gender persons remember, they're Republicans, plus check out their poster): 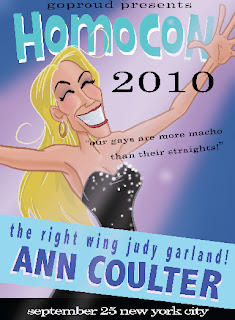 HOMOcon?!?   The right wing Judy Garland?   Honestly, Hugh Hewett, how self-hating can one boy be?  Hilarious that the WND Tea Party Cruise facebook page calls her "Ann Coulture" -- that's what the blond Republican cross-dressers call their high fashion, too!

Ann's argument is basically, hey their money's green.  But we knew her bony ass never gave a shit about anything but attention and money and now she gets a twofer.

But it's for the best.  The Gay Republican group gets Ann, and the homophobic group gets Tom Tancredo.  Imagine the eye bleach we'd all need if it was the other way around.

UPDATE:  Aw hell I just hadda do it. 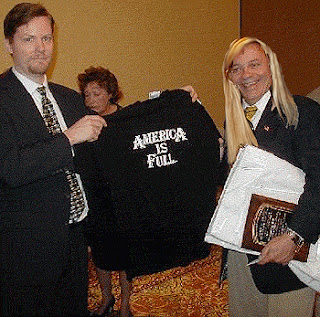 PS. Liberals can't afford one radio network, let alone double occupancy for six days on a boat, But WND conservatives (I presume they are wealth producers who have a few more months of Bush Tax Cuts to spend) can  follow up the World Net Daily Coulterless Conference with a "Tea Party at Sea" cruise, which would be Dante's sixth circle of hell except I guess the cute Panamanian sheet changer staff on board will be putting on their sad face--Hewitt isn't coming.
permalink 7:44 PM