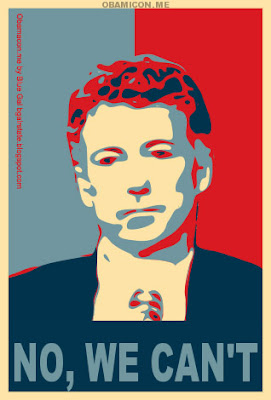 Three things about Rachel #Maddow 's amazing interview with Rand Paul last night, in which he prevaricated about the rights of black people to be seated in restaurants, because then we are forcing restaurant owners to let armed-with-guns people in there, too. (No, really. That's what he said.) :

1. Maddow is the classiest person on television. She did not raise her voice once or freak out, like the whole of Twitter did during this interview.

2. Watching the interview was like watching a micro-version of Frost/Nixon. Rand Paul did not see the devastation that was happening to him. I think Goldman Sachs can short sell the Rand Paul campaign now.

3. I am no longer worried that 2008 Obama voters will lack motivation to turn out in races that need them. Lookee here.
permalink 10:39 AM