Feeling the frustration and opting in anyway....

There's a truly wonderful rant over at LA Progressive by Wayne Williams, in which he rails against not only the nation's destroyers on the Right, but also the self-seeking corporatist Blue Dogs on the "Left":

The corporate greed machines won, our culture has collapsed, the people have lost by their own choice, the wealthy and powerful have figured out how to destroy a once great nation. Yet like their own devious heritage, they too will soon turn against themselves. Like Madoff sucking his rich clients wealth, BP and Goldman et al., will do the same until they all are the only ones left standing, and then continue to eat each other alive for the last polluted morsel left. Leaving us all without even air to breathe or water to drink, at least none without a very high price to be paid.

It will be all our fault.

We are living through some terrible times. But I don't see Wayne's point in opting out for the summer. After a bit about being the change we wish to see, Wayne says:

See them all for the bloodsuckers of crony capitalism—Democrats and Republicans alike.

Am I upset? You think? Oh well, so it goes. This was not the great nation I thought it was. It is a corporate dream machine of unconscious idiots, but how do I really feel? Just plain angry, that’s how! I’ve given my all by playing by the rules, working with the system only to find out the rules rig the game against the people and the people don’t give a damn.

Tell you what I’ve got in mind on the outside chance the Democrats can wake up. I suggest Progressive activists and bloggers do the same – that being, let us have a Summer of Silence. Let us not support the Democrats even with our outrage at their incompetence. Stop the talking, the complaining, the organizing, the blogging. A Summer of Silence, that makes them fear the fall—wondering if we will be there in the end with them in November.

Here's the deal. Look carefully at the two progressive protesting guys below: Can you tell the difference? Do you care? Neither does he: 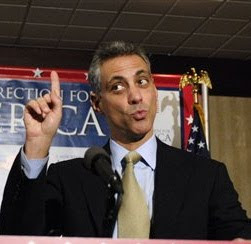 He also doesn't wonder if we will be with Barack Obama in November. Trust me. You can take the summer off if you like, and for some of us a re-charge of the batteries is essential. I'm spending this month knitting more and it's really helping my stress.

But I don't think a summer of silence for bloggers is desirable -- or possible. See, 'herding cats.'

We blog not because we're great journalists, we do it because we're citizens who are paying attention. There is no time off from PATRIOTISM. I love America too much to take time off from attending to what is happening socially and politically in the world. Suck it, Hannity.

But on many things Wayne is right and I'll stand with him and say it again and again: the most important issues, the ones that matter more than any other, are campaign finance and media reform. Every other issue hangs from those ropes.
permalink 6:34 PM