Jesus met the wingnut at the well.... 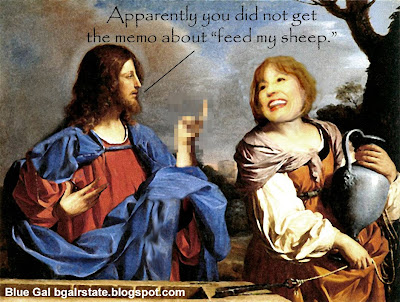 ...and gave her a sign. [The hand of our Lord is pixelated for your protection. Click image for larger.]

Honestly, when I hear claptrap from people like Sharron Angle saying God is on our side, my own christian-with-a-small-c tendencies sink to the bottom, and my dope slap them Jesus through blogposts of strife start bursting through. The hubris that puts God on one's own side is a punishable offense. Ask the Pharisee:

“And he spake this parable unto certain which trusted in themselves that they were righteous, and despised others: Two men went up unto the temple to pray; the one a Pharisee, and the other a publican. The Pharisee stood and prayed thus with himself, God, I thank thee, that I am not as other men are, extortioners, unjust, adulterers, or even as this publican. I fast twice in the week, I give tithes of all that I possess. And the publican, standing afar off, would not lift up so much as his eyes unto heaven, but smote his breast, saying, God be merciful to me a sinner. I tell you, this man went down to his house justified rather than the other: for every one that exalteth himself shall be abased; and he that humbleth himself shall be exalted.” (Luke 18:9-14)

And just in case anyone has forgotten, Jesus of Nazareth was nailed to a tree by the political and religious CONSERVATIVES of his day because they mistakenly thought they had power and that he threatened that power. ANY Christian, myself included, who thinks they would have rescued Jesus from the cross, that certainly WE wouldn't have gone along with Pilate and Judas and abandoned him like Peter, are just kidding themselves. And those right-wingers who think they're really serving the cause of Jesus by electing Republicans, or working to make America a "Christian" nation? Little Christian ladies like me can say fuck off, can't we?

It's that the religious right/Republican Party has so often set the discourse that "God/Jesus equals us" that some of us lefties tend to believe that. Rejecting hate speech, intolerance, and fundamentalism becomes rejecting all religion.

But see, I love Jesus, and I'm strongly committed to making sure YOUR right NOT to believe is protected. I also believe, while we're at it, that I would be SINNING against my God to attempt to convert you. That's His provence. And if I believe (and I struggle to, at least) that God is Love and that God loves his creation, I think smart, funny, gifted non-believers have one of the better tables at Divine Love's cocktail party. You certainly do at mine.

Here's the deal about Christians, though. We're not all Sharron Angle, and I refuse to allow Sharron Angle to tell any of us what God wants. If she really wanted to follow God, she'd shut the fuck up and listen. The still small voice is not in the religious isolationist shriek of the Tea Party.

Sharron Angle does not speak for me.

Those of you who have read this far, thank you. No one pays me to do this except generous readers like you. Please give what you can during my quarterly fundraiser. (And Friday is my birthday.)

Email ThisBlogThis!Share to TwitterShare to FacebookShare to Pinterest
Labels: God is love