The Occupation and Resistance of Sarah Palin

Cynthia Tucker with a little George Will on the side, says what needs to be said regarding Sarah Palin and the public stage. But there's an important subtext in this discussion that is being overlooked.

They are talking about Sarah Palin as a politician. Because that is what she is.

Of course she and a lot of other politicians resist that label, no more politics as usual, those politicians in Washington, you betcha, they are the problem. And yet, Sarah Palin's occupation, at least through the next three weeks or so, is politician. It's a dirty word, akin to used car salesman and prostitute, but the nation perishes that thinks themselves above electing politicians to public office.

But no. He's got a new job. His occupation is now US Senator, and Harry Reid doesn't think fart jokes are funny.

I just listened to Franken take the oath of office, and I suspect Sarah Palin held a Bible and said "faithfully execute" just as he did. Ironic that the comedian seems to take it, um, seriously.

There are good politicians and bad and certainly these days the whole lot of them have a verifiable "corporate soft money whore" label attached to them. It's becoming more and more undeniable every day that Congress represents moneyed interests more than it does their constituents, all of Franken's talk about serving Minnesotans aside. It's going to get a whole lot worse before public financing and real reform happen. I doubt I'll see such in my lifetime, frankly.

But she resists. Palin rails against politicians and "business as usual in Washington" and her followers eat it up.

The thing is? So do we on the Left.

Leftists are waking up to the fact that our President is also a politician. Obama seems committed to maintaining his own power in Washington, at the expense of trailblazing the path towards single payer gay military peace-time weddings for all. I'm not denigrating the goals of the Left by putting it that way. Whether we like it or not, Obama sees the path to reaching any policy goal requires that he maintain political power. The power comes first, then the victory. We Lefties hate that, because we always put being on the right side of an issue higher than getting anywhere toward our political goals.

A fellow blogger had a fit last night via email, because that blogger heard a rumor that possibly abortions would not be covered under the Public Option. I. Just. Winced. All. The. Way. To. Bed. We don't HAVE a public option yet. It's not a sure thing. We have to wait for the insurance companies to fail before single payer is maybe possibly back on the table, but let's pour a heaping cup of the most divisive issue of the past fifty years into the pot right now, because it's so very critical.

Hey Lefty Bloggers, let's stroll over to the Rose Garden, interrupt this conversation below, and ask these two people if they think compromise is for sissies: Hillary Clinton understood far better than some of her supporters just how tough her opposition would be. The Clintonites still fighting the primary battles insult her and her chosen career with every blog post.

Those waking up from Obama worship need transition time to find their sea-legs with this President. He's a politician. It surprises me not at all that Obama is not rolling back Presidential executive power. Why would he? Unless Bush or at least Alberto Gonzales goes to jail, unless some miracle happens and the public begins to realize that The United States of America is governed by this: 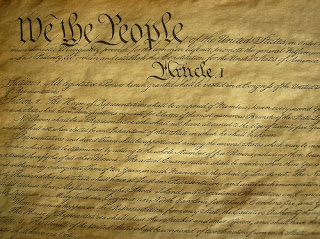 rather than a bunch of politicians....

We may hear pretty speeches on national holidays and campaign trails along those lines, but face it, no politician is ever going to vote for that. That's not in their job description.
permalink 1:55 PM

Email ThisBlogThis!Share to TwitterShare to FacebookShare to Pinterest
Labels: politics