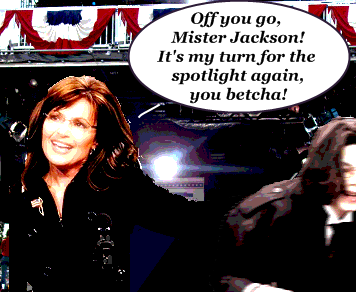 THAT was an unusual day.

Wolfrum (genius): GodWink’s Law: As other stories capture the public interest, the probability of Sarah Palin thrusting herself into the news approaches 1.

If she had come forward to say her special needs child had grown into a toddler, and she was going to spend the next four years doing whatever she could including sacrificing her own promising career, to help him develop verbal language and age-appropriate social skills...

...If she had come forward to say that the toll of publicity was damaging her marriage and her relationship with her family, and she was sacrificing her personal ambition for the sake of her family...

...If she had come forward and said that her Presidential ambitions were interfering with her duties (they never do that) and she was sacrificing THIS job for a better one, and moving to, oh, Iowa.

...but I didn't hear anything about sacrificing, did you?

I heard self-congratulation, followed by a total lack of logic, infused with nervous embarrassment. The timing? After lunch on Friday, July 3? Positively Nixonian. 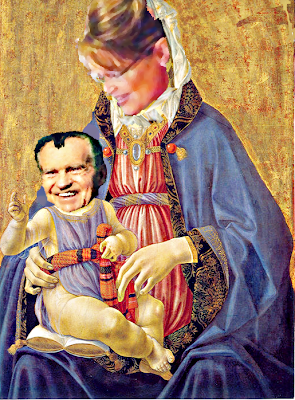 Maybe she just gave up. I've said it before, there's a bright future for her on the mega-church lecture circuit, and FOX will give her her own show tonight if she wants that, also too.

She'll land on her feet red high heels, you betcha.