Only in South Carolina.

First of all, the mayor's name is Danny Funderburk. I know. I could stop there.

Then, he forwards a viral email which suggests that...wait for it...Barack Obama might! possibly! be! the antichrist!

And his excuse is, Cavuto time! He's just asking the question.

As one of the few bloggers out there with a divinity degree, allow me to answer your "question," Funderburk.

There is no scripture behind which to hide your religious bigotry.

But you've given me an opportunity to illustrate what is going on in the South. Racial bigotry is bad for tourism, and public display of such is socially unacceptable among public figures.

Religious bigotry, including throwing around terms like antichrist and scripture, is still socially acceptable in South Carolina and much of the South. And "Muslim" is totally the new "n*gger." 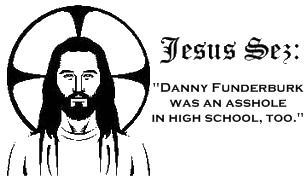