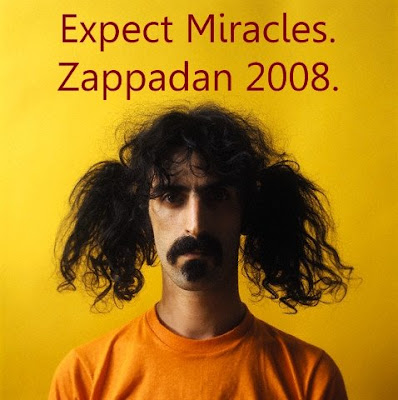 Frank Zappa died December 4, and was born (earlier, they tell me) on December 21.

Two years ago, the blog known as The Aristocrats declared that December 4 through 21 should henceforth be known as Zappadan: the days of the year between death and birth, that ethereal time when there was no Frank, so we must celebrate him to keep his spirit safe until his birthday again.

Or it's just a great excuse for a party that has nothing to do with the greed and debt festival known as Christmas in America. In any event, it's a labor of love with the hope that Frank would be proud.

"Some people say" that the Miracles of Zappadan stuff is a buncha hooey, but I disagree. During the first Zappadan in 2006, John Bolton resigned. Then last year, Sandy Underpants went to the registry of motor vehicles during Zappadan and got a new license plate with no lines, no waiting, and free donuts.

Details here. Thanks.
permalink 9:38 AM

Email ThisBlogThis!Share to TwitterShare to FacebookShare to Pinterest
Labels: zappadan