Change him to a nun, he's still a Newt. 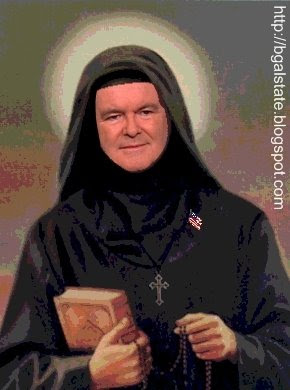 It's not just that Gingrich doesn't realize that people can look up what he said five years or five minutes ago on the internet tubes. Newt has become a Catholic, I believe, because old-style Catholicism buys into what he (and Republicanism) have believed all along: that you may not be perfect, but you are always forgiven, provided you profess loyalty and devotion to the ideology involved. So as long as you SAY you believe in the Holy Catholic See/Grand Old Party ideology, no matter how much you lie or how big a hypocrite you are, the indulgences will come at you fast and easy.

From Wikipedia, which in this case is a pretty accurate rendition:

An indulgence, in Roman Catholic theology, is the full or partial remission of temporal punishment due for sins which have already been forgiven. The indulgence is granted by the church after the sinner has confessed and received absolution. The belief is that indulgences draw on the storehouse of merit acquired by Jesus' sacrifice and the virtues and penances of the saints. They are granted for specific good works and prayers.

The Republican Party and the 24 hour news cycle (that apparently needs them to fill up 'fair and balanced' programming minutes) doles out indulgences all the time. That's why compulsive gambler Bill Bennett and Christian Right/Gambling benefactor Ralph Reed can appear on CNN as Republican analysts and Wolf Blitzer doesn't bat a eye. It's why Newt Gingrich himself is allowed into the green room at This Week any Sunday morning he likes, whether Paul Krugman sits next to him or not.

It's why despite his horrible record and affairs and total hypocrisy he may be the standard bearer of his party, the party of family values, in 2012.