How To Tell The World You Own Everything 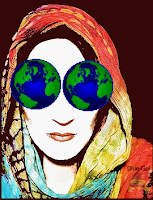 I had the privilege in college to have two black roommates. One of them, K, told me the story of a group of girls she knew who tied scarves around their heads in specific knots to say certain encoded things about themselves. One of the girls was wildly derided when she showed up for a meal one day with a headscarf that said, we hope accidentally, "I own everything in the world."

I thought of that woman when I read this article at Motley Fool, an article which made me laugh given the current "volatility of the markets." No one would have questioned the importance of 401K's six months ago, and saving is of course, still important, but the idea that we "can't trust" Social Security and MUST use the old 401K model or face inevitable personal economic disaster? Really, Fools.

The first comment at that article reminded me of the woman with the "own everything" head dress:

If you think the Baby Boomers are going to allow the Government to cut our SS you are crazy. We will have the White House, Capital [sic], and the Pentagon in downtown DC before we allow a cut. Remember we vote and if you think Politicians kowtow to seniors now just wait to we retire en masse.

That commenter does not speak for all boomers or even all retirees. I know one woman who actually wrote to AARP many years ago to cancel her membership, because at that time she felt the organization was founded on generational greed.

I've mentioned before a friend of mine who was born during the first days of the Baby Boom, in 1946. She said that what that meant for her was that every single time she changed from one school level to the next, she had a brand new school building that no one else had ever used before.

The next President will either be in his forties or in his seventies. It looks like the post-boomer is going to win this one, and he's going to have a time with certain members of the preceding generation. Whether it's about "entitlements" (what a word) or even about the election just past (remember the primaries and the generations represented at the end of the Democratic race, ahem), a great many people in that generation have a sense that the world belongs to them. Think about the rhetoric surrounding the 401K/stock market debacle, "MY savings have been ROBBED," not to mention the "stolen primary season" of Terry MacAuliffe Hillary Clinton: as if there should be no risk or responsibility in the stock market or the campaign trail.

Hopefully Obama can take that sense of ownership and translate it into a sense of responsibility. I doubt that will work for an internet commenter who threatens to take over the Pentagon if she doesn't get her monthly direct deposit in full.
permalink 10:00 AM