There's just too many pro-Obama endorsements to read. 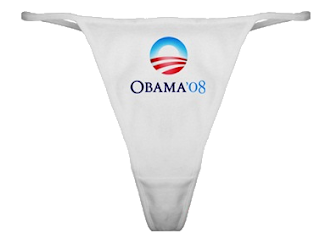 What with the New York Frackin' Times and all jumping on the bandwagon. But there's one endorsement article I don't think anyone should miss, especially if you're like me. I did not support Obama in the primaries until he became the defacto nominee, and I still have a sense that Obama will be a conservative Democrat in the White House. That concern has been placated by the total insanity of the McCain campaign, of course.

I highly recommend if you feel the same way, that you read Esquire's endorsement of Obama. You won't learn anything, but you'll read an eloquent confirmation of your opinions.

And then there's this...

I mean, just listen to him. He sounds so stable and boring and shit....I think that's what's going to change America, is when bigots realize eighteen months from now that Obama is just so incomprehensibly Presidential to their numb minds, and the color of his skin doesn't make any difference. In that regard, Obama's "competent conservative" (historical similarities to Jackie Robinson, anyone?) may bring the biggest positive change our country has seen in many decades.

On topic, Frank Rich is absolutely right. The bigots are not nearly as numerous as the media says, they're noisy and the existence of even one is embarrassing, but there are not "enough racists in 2008 to flip this election." And I think the next four years are going to "flip" a lot of racists. I hope so.
permalink 9:32 AM

Email ThisBlogThis!Share to TwitterShare to FacebookShare to Pinterest
Labels: about time she posted Obama panties