More on Blog Against Theocracy

It looks like for Blog Against Theocracy we might be up against the current administration. From Americans United, which is an excellent resource as we all start thinking about this year's blogswarm:

President Obama has failed to deliver on his campaign statements. When creating his Council on Faith-Based and Neighborhood Partnerships, Obama failed to adequately prevent harmful discrimination on the basis of religion by government grantees. Although President Obama had originally proposed a new take on the Faith-Based Initiative, one that will not maintain the constitutional and civil rights pitfalls of the Bush Administration, the executive order he signed last week leaves the entire architecture of the Bush Faith-Based Initiative intact - every rule, every regulation, every executive order. And thanks to an aggressive anti-civil rights push from the Department of Justice near the end of the Bush Administration, nearly every social service tax dollar distributed by the government can be used for discriminatory hiring. In a time of unprecedented need, this is even more unacceptable than ever.

We have some lovely submissions for Blog Against Theocracy logos. Please keep them coming! Email me at bluegalsblog gmail.

From Mark Hoback at the revived and reviving Fried Green Al Quedas: 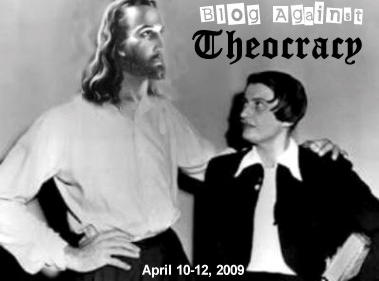 And here at long last is Tengrain's, which is available in different sizes on his Flickr page (suitable for sidebars and such): 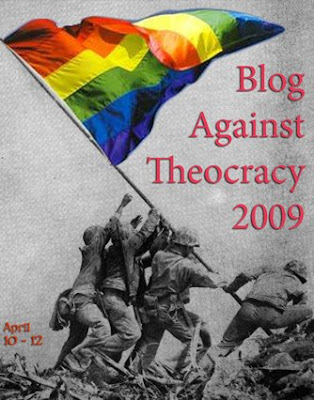 And then here's a little thang I crayoned this afternoon: 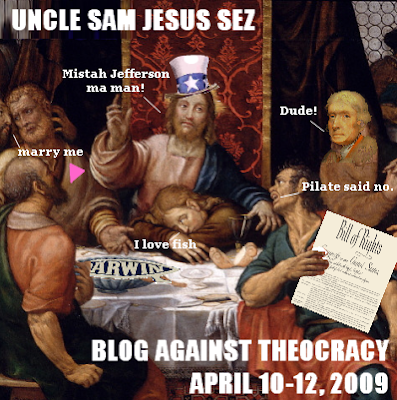 Email ThisBlogThis!Share to TwitterShare to FacebookShare to Pinterest
Labels: "blog against theocracy"