This week marks two important anniversaries that those who blog about peace may wish to commemorate. 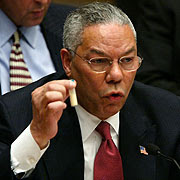 The first is what Corrente calls the "Day of Shame," where Colin Powell testified to the UN six years ago, in favor of unilateral military action against Iraq. Since the war is not over, duh, I for one think this anniversary should continue to be commemorated. (Feb. 5)

We were fooled, largely by Colin Powell and The New York Times. And we are still paying the price.

The second anniversary is also a day of shame, this week marks the two-year anniversary of the speech our current Secretary of State gave to AIPAC, in which she said that pre-emptive nuclear attacks were still "on the table" regarding Iran, and defended her vote for the Iraq war. I won't speculate whether she has tempered her views, but she may be toning down her rhetoric for her new job. I certainly hope so. Her job description now includes "finding ways to make peace" rather than "kow-towing to hyper-Zionist campaign donors". I hope she can "pivot" with her typical grace and aplomb.
permalink 5:23 PM