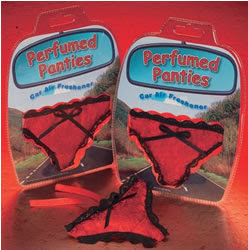 This car panties air freshener trend is disturbing to me most of all because I just hate to see Norman Mailer proven right.

It's true that we now have the technology to make anything smell like anything, though Bushco's ability to make shit smell minty fresh has failed of late. I wonder at the hand that puts peach fragranced underarm deodorant in the shopping cart. What the hell kind of world are we living in, anyway?

Television is the drug of choice.
The drug leads us to lower skills.
We can't get good jobs because we don't have skills.
We need a job to pay for cable TV, Ipods, cell-phone cameras, etc., so we can escape the fact we have no skills and no future.
We line up for jobs at Circuit City. They sell the TV's, Ipods, cell-phone cameras, etc., that lower our skills, so we will have no other choice but to work for Circuit City at an hourly wage.
We work at Circuit City for a long time. Some of us work there for twenty years.
We get raises for working at Circuit City a long time.
Circuit City's management decides we make too much money we are having a negative impact on revenue so they fire us.
But it's okay. We get a severance package that will pay the cable bill for ten weeks, and then we can go back and re-apply to Circuit City for lower wages.

Cut and pasted from the AFL-CIO Executive PayWatch website. (Linking to an oldey-time union when arguing for better treatment of employees? Oh how quaint.) 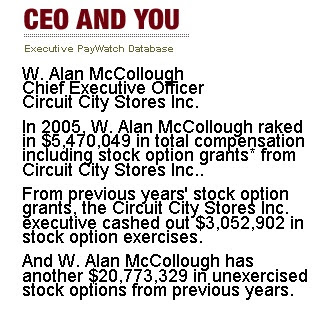 Good job, Alan. CC was up 1.7% yesterday; future's so bright ya gotta wear shades, eh? And conveniently for you that corporate-owned media's coverage of your "restructuring", I'll betcha a stock option, will be on how Circuit City will work hard to battle "low morale" while keeping its stock price up. Might hafta hire some low-wage security guards in the short-term, Alan: at many participating stores I see disappearing flat-screens with no subsequent "increase in revenue". Just saying.

UPDATE: Eat your heart out Norman Mailer, I was proven right in five minutes: reports show "retail analysts" are concerned that "The question remains as to whether Circuit City can rebuild in time for the all-important holiday season." And Mr. Blue Gal advises me to stop saying "fuck" on the blog. Heh.

Bloggers: STOP calling it MSM. It's corporate-owned media. Money-stream, not mainstream. That's what we're talking about.
permalink 9:12 AM