I know this is last week's news, but I was on vacation, and I want to sound off about John Gibson's plea that we all make more babies. I'm lovin what Bibliosquirrel had to say:

...the phrases "making babies" and "John Gibson" in the same sentence is likely to put women OFF their feed, if ya know what I mean.

[Full disclosure: Blue Gal has done her bit to keep white American babies in the gene pool. "2.1 children per couple" is the demographic replacement rate, and Blue Gal, after her ob-gyn told her having 0.1 babies would cost extra, went ahead and had three. And while there are instances in life where three is one too many, when it comes to my own children I wouldn't change a thing.]

Even Canadian commentators weighed in on this issue. Margaret Wente in the May 13 Globe and Mail has a purely Canadian perspective, but her point is universal (subscription only so I won't link to it):

...rural Canada [is] depopulating. Moose Jaw and Carbonear are destined to be ghost towns, unless we can persuade Chinese and South Asians to settle there, which I doubt. Your caffe-latte-coloured great grandchildren (if you are lucky enough to have any) will be amazed to learn that people once lived there, and that Canada was once overwhelmingly white.

Two thoughts come to mind here: first is the preservation of whiteness, which Gibson swears was not his point (and Blue Gal can't figure out what is point was, then).

We somehow think this debate grew out of the current US immigration debate. It didn't. In 1751 Benjamin Franklin was all freaked out in Philadelphia about German immigrants:

Why should Pennsylvania, founded by the English, become a Colony of Aliens who will shortly be so numerous as to Germanize us instead of our anglicizing them, and will never adopt our Language or Customs anymore than they can acquire our complexion?

Huh? Germans not white enough for you, Ben Franklin, poster boy for the Minutemen?

A little later in US History 101, we'll learn about Teddy Roosevelt, another dead white guy who worried publicly in 1903 that the progeny of dead white guys would not longer rule the world unless white guys persuaded white gals to spit out the babies like poor, southern European, (oh hell, just say it, Catholic) immigrants were. He went so far in one speech as to warn against (white) "race suicide." Yeah.

The important lesson that Gibson's veiled hate speech uncovers, is that peoples who refuse to get along with their neighbors (uh, that would be us vis-a-vis Mexico) either in the short run or the long haul had better make sure they procreate. For instance, Palestinian mommas are churning out babies faster than a Jewish mother can make her daughters feel guilty about it. The battle for Israel is being lost in the time bomb of the maternity ward. This from the Population Resource Center:

Jews currently make up just over half of the population of the region, but due to high birth rates, Arabs will become a clear majority within twenty years. In 2020, the region will be home to about 6.4 million Jews and 8.5 million Arabs.

And Israel will either have to allow the majority full citizenship (no more Jewish state) or be guilty of apartheid with the minority in control of a much larger majority. They're afraid that change is coming in Israel, and they should be.

Speaking of control, it should be noted that in spite of the dearth of white births around the world, the Bush/Blair/Putin/Stephen Harper (Canadian PM, Conservative) administrations seem to be doing an excellent job of making sure the white guys continue to own everything, even to the point of pre-emptive wars over petroleum reserves. So not to worry, white guys, I think you've got it under control. Take a Prozac, take a Viagra, and take it easy. 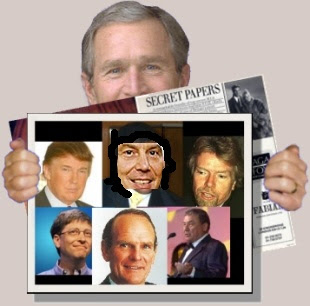 The second thought is preservation of population levels. Now I know the baby boomers are the center of the goddamn universe, and it's just awful that they're too selfish to grow up and have babies of their own. But my sense is Mother Earth is breathing a huge sigh of relief. There is actually, absolutely, no way that a generation that comparatively huge to the ones before and after can or should "replace" themselves demographically. The boomer generation has left a huge environmental footprint on the planet which will take eons to re-fill. It's perfectly okay with the environment if we have a few less people here. (Blue Gal goes green in a soon to be published environmental post. Watch this space.)

On topic and highly recommended: this op-ed by David Barash in the LA Times.

And not to "should" all over you, but as Gibson so clumsily back-pedalled, the skin color of the babies who are here should not be an issue. Blue Gal is blue, notice, and she is gonna loooove her mocha latte grandchildren. Her daughters are mere toddlers, but the guilt lessons have already begun...