Hey! Let's all go to college! 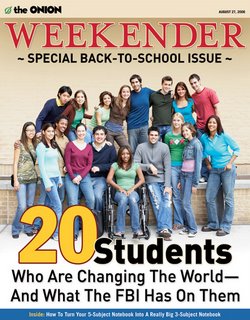 An article by Clive Crook in November's Atlantic Monthly argues that in a society like ours where the majority of young people now go to college, college itself becomes a cheapened commodity. Jobs that used to be entry-level from high school, to which one could work oneself "up," now require a college diploma. Crook gives the example of Hotel/Motel Management, but does not say whether the degree or the requirement for one came first.

More high school graduates than ever are going on to college. But rather than the rising tide of education raising all economic boats, as parents have always hoped, it is clear that job opportunity (and income) winds up being a result of who your parents are and what kind of college education they can buy for you. "[P]arental incomes better predict children's incomes in the United States than they used to...America is becoming less meritocratic."

What Clive doesn't discuss are two other factors: the decimation of both labor unions and the industrial base in the United States in the 1970s and 80s, and the fact that since that time, real wages have failed to keep up with inflation, particularly in the housing market. Unlike the days when factory jobs were more plentiful, a young person without higher education simply cannot make enough money in this country to live on.


More and more it seems to me the job market has two opportunities: computer programmer oops sorry, those jobs are being exported to India, and Wal Mart. Bank tellers have four years of college or at least two. You wind up spending at least $45,000 to make a starting salary of less than that amount before taxes each year if you're lucky.

There are some secrets in this story: college educated black women make more money in the course of their lifetimes than college educated white women, due to two factors: black women are less likely to stop working when they have a child, and are more likely to be hired to management positions in the public sector, where benefits are high and salaries good.

I think Crook's (sorry for that name, but that's really it) basic question is worth discussing. Do we really want a society where everybody HAS to have a college education? For one thing, it leads to college classes where a great many students want to know what ancient history, philosophy, and literature have to do with their getting a job, and no one wants to hear the article's argument that "enlightenment, not productivity, is the chief social justification for four years at college."

Then there are the college students who party their four years away. What is their contribution to society? My sister had a classmate in one of her history classes say, "I got a D-minus. Thank God! All I needed was the credit!" Credit for what? He's got the diploma now, so I guess he can work at Hampton Inn.

When I was getting my second master's degree (Don't get me started. I'm a blogger now. Enlightened, not productive! See?) my special education professor pointed out that one of the big problems with No Child Left Behind is that it expects each and every child to be a scholar. We don't expect every child to be an athlete, but we expect them to be scholars, even if they have mental retardation (MR students are tested and their test scores count toward the public school's overall average), and even without funding the mandate. We all must go to college, even to work behind the desk at the downtown Marriott. Our nation's future depends upon it.
permalink 1:59 PM