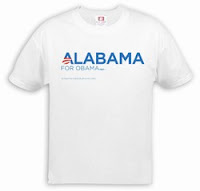 ...but did I tell you guys I ordered an "Alabama for Obama" shirt and they're on backorder?

A big part of this election is going to be just how many African American voters are disenfranchised by the racist war on drugs.

That's because every single one that isn't disenfranchised is gonna be drinking BillO's motherfuckin iced tea at the polling place.

And frankly I don't think it would be a good thing for Obama to carry Alabama with an all black vote, which is what it would take. He's better off, as President, being elected by a wider cross section of voters.... 50 state strategy sounds good, and this may be a landslide, but unless the economy really tanks I don't have enough faith in white voters in the South to see Obama carrying the state of my former residence.
permalink 5:15 AM