Tucker Carlson creeps me out anyway...

But not as much as when he appears in the Washington Life society pages. Sorry I'm so late to the party, Tucker. The party-going of the villagers disgusts me, but really, we should be watching because you guys run the country and determine what we are permitted to discuss. And you party with each other, only, there's a club and we're not in it, etc.

So henny-way Tucker, some desperate DC Sally Quinn wannabe opened her house so your website**** (yeah I was the hit you had this morning, you're welcome) could have a launch party. Did she write the article, too?

So many people came to Juleanna Glover’s house to help inaugurate the Daily Caller that partygoers looking to find the website’s founder, Tucker Carlson, had to call him on their cell phones.

The Daily Caller went live on Jan. 11, adding yet another must-read for news junkies – who should probably file a sleep deprivation class action suit against Matt Drudge. (After all, his Drudge Report pretty much started the phenomenon).

Has Tucker finally hit his stride? We hope so. He’s hosted or been a guest on all the major cable networks with multiple writing positions along the way. The consensus according to radio talk show host Bill Press: “If anybody can cut through, thrive, and survive, it’s Tucker. He’s always fresh and different.”

Wow. Unrecognized? Is that the polite villager euphemism for "who invited the ex-convict?" 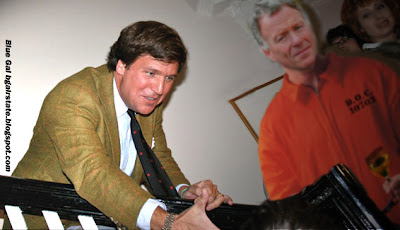 ****I feel so much better knowing that someone is losing money right now from The Daily Caller, which features horribly-written, desperate link-slut headlines like "HuffPo celebrates 5th birthday as it remains on the rise." The end.
permalink 11:21 AM

Email ThisBlogThis!Share to TwitterShare to FacebookShare to Pinterest
Labels: just itchin' for a fight with these people