It's okay kids, she doesn't really mean it!

McCain-Palin campaign spokesman Michael Goldfarb writes: "Governor Palin has never worked for any effort to elect Pat Buchanan -- that assertion is completely false. As Mayor of Wasilla, Sarah Palin did attend an event with Mr. Buchanan in her home town where reports described her wearing a Buchanan for President button. She wore the button as a courtesy to Mr. Buchanan and in an effort to make him feel welcome during his visit, but immediately sent a letter to the editor of her local paper clarifying that the button should not have been interpreted as an endorsement of any kind."

Yeah, it's always the buttons that lie... 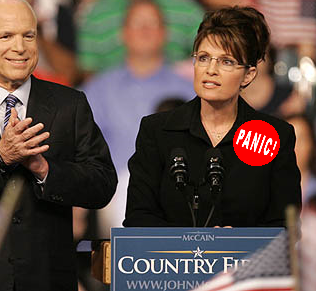 The McCain campaign says that instead of supporting Buchanan -- or even McCain -- in 2000, Palin actually supported Steve Forbes.
permalink 8:07 AM