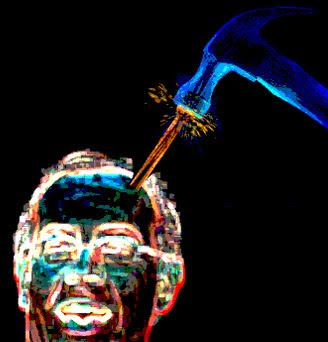 One, if I thought for a moment that David Brooks writes the way he does due to brain damage brought on by a claw hammer, at least he would have a valid excuse. Plus it would prove that The New York Times does not discriminate based on mental capacity, but hey, we knew that.

Two, I know that the David Brooks column is the blog property (tm) of my colleague Driftglass, and that by even commenting on a David Brooks column I am trespassing on DG's intellectual property. But those of you who read and listen to both of us know that most of what is written below is stolen from Driftglass whole cloth, and I acknowledge the theft. But the email with the subject line "David Brooks nails it" came into my inbox from a group list which I usually consider thoughtful and considered. He wrote:

As I watch with horror at events in Afghanistan, Iraq, the Middle East, the Gulf of Mexico & elsewhere I have become increasing depressed & fearful about our future. Although i often disagree with David Brooks' positions on the role of government, I think this is a very thoughtful piece.

Okay, I totally get the depression and anxiety, I think we all do. And I also attribute the fact that David Brooks has a job to the fact that he is able to place a warm cocoon of "intellectual reasonableness" around that anxiety. The fact that he is full of shit when he does it must never, ever be overlooked.

I had to respond:

I must respectfully disagree. This article is typical David Brooks BS.
well-meaning corporations sometimes take shortcuts when it comes to controlling pollution and protecting worker safety.

NO. Corporations are not designed to be moral agents for evil OR good. They are designed to do one thing: make a profit for their shareholders. As my co-podcaster Driftglass points out in his latest post

Even the most cursory reading of the literature shows that, as machines designed to do nothing but maximize profit, corporations are fundamentally sociopathic and will generally conduct themselves with a sense of public morality no greater or less than the size of the gun the gummint has pointed at their heads.

where he gives LOTS of examples of this...but seriously, the term "well-meaning corporations" should just make everyone in the universe barf simultaneously. Shipping jobs overseas to engage sub-standard wages is the LEAST of their sins, and perhaps raping the entire planet is the greatest. Give me a break.

Those of you who follow David fucking Brooks (his real name as far as most bloggers with a conscience are concerned) you owe it to yourself to bookmark http://driftglass.blogspot.com. DG usually responds to DFB each time the latter dips his pen in the oatmeal of conservatism to pretend that his entire career has not culminated in the party of bigots and fundamentalists.
And these pig-people who drive off to Tea Party Rallies with money cashed from their Social Security checks will NEVER require a rationale for their rage at government other than a black man put his hand on a Bible and took "their country away" plus they're high on the smell of Rush Limbaugh's farts. Really, you think most teabaggers are deeply troubled by the expansion of government? Try cutting Medicare and see how that works out for ya.

Brooks gets paid money make a rationale for a country club rational conservatism that does not exist. In that regard every column is exactly the same.

Then I went and read the article again. I wish Driftglass had warned me never to do that.

the plume exposes the country’s core confusion about the role of government.

CHRIST ALMIGHTY!!!! There is NOTHING CONFUSING about Dick Cheney meeting with his oil cronies behind closed doors and unilaterally setting government policy that deep-water remote shutoff valves were too much fucking government regulation!

Honestly people!! With each reading David Brooks needs to be fired for this one column alone.