Updated with links. Sorry had to grab a train this morning. 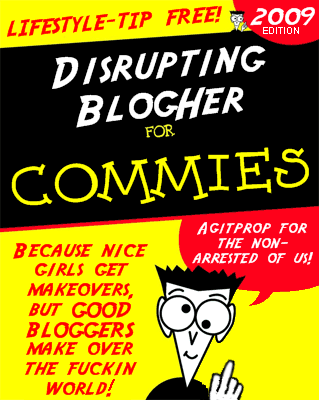 how to marry traditional [media journalism] experience with new tools and incisive business savvy.[and] how new media is revolutionizing popular, for-profit media by placing online, social media front and center (and what that means for you).

Three other women were on the panel with Tina: one African American, one L word founder, and one blonde, oh wait that's two blondes on the panel. I guess they didn't know I was going to be there.

It's very important to remember that BlogHer is not just a conference, it's an advertising network for women bloggers, primarily what are called mommy bloggers. The strength in numbers model for selling advertising is well-proven, and more power to them. They're far more successful at selling ad space than the Liberal Prose network I belong to (as do Feministing, Susie Bright, and Bitch, PhD).

Also unlike Liberal Prose this BlogHer conference has WalMart as a Platinum Sponsor. Okay they're corporate whores, but they're very proud of how empowered their corporate whoredom makes them. Hey, I'm trying to be fair and balanced over here.

Anyway, Tina Brown said she "would never EVER go back to print because online media is so immediate and dynamic." And the rest of the HOUR most of the discussion was on how she handing her online advertising , and how she is excited that she can preview her templates with advertisers to get their input, and how her goal is to "wrap advertising around" the editorial content.

She responded to questions that she didn't like product placement, Starbucks on Morning Joe, though it's not really "harmful" she didn't want to do THAT, but but but....

...and she was so excited to be a Blogher and hear these amazing stories from women that just had to be shared by Daily Beast and there was no discussion of paying women to write for them, but lots of glad talk about how great it was that there are citizen journalists now. I hear that Daily Beast pays former journalists but I haven't heard whether or what they pay anyone else. Does anyone reading this know?

A colleague of mine pointed out in email:

Without meaning to upset you, Fran, I feel like this is a little bit like being shocked that the snake bit you after you helped her, because it is the nature of the snake to bite.

Tina Brown is not about blogging, or writing, for that matter. Tina Brown has always been about making money and rubbing shoulders with the rich and famous, preferably both. That is her nature. Have you looked at Daily Beast? It's really unimpressive, even with Barry Diller's money. But she quickly grabbed star names to blog for her, with little worry as to how well they wrote (I mean, Meghan McCain, c'mon....).

She did miserable things to the dead paper prints she worked on--both to the publications' credibility and the writing staff. I've no doubt that the most exciting thing about blogging for her is the idea of getting as much advertising clicks as she possibly could.

I don't want to project my hatred for Arianna Huff, who is notorious for not paying writers, on to Tina, but Tina Brown and the other panelists think us Mommy Bloggers (fuck you fuck you fuck you) need to form networks to show advertisers our clout. And apparently we can do this just fine without 12 million dollars of Daily Beast startup money from Barry Diller, of which there was also no mention by Tina.

And the audience seemed totally interested in tailoring content to please advertisers because "we" women have such amazing power in being the purchasing decision makers.

One of the panelists actually said the words "it's all about getting your content into the hands of advertisers." Blogging is just another way to whore product.

Contrast that with meeting four third-world women bloggers who were ghettoized into a Saturday afternoon slot and had fifteen people listening to them talk about how they are changing the world. To be fair BlogHer brought them to the conference on (sponsored!) scholarship but wasted them by not showing them off in front of the whole conference.

Their presentation made me really cry, tears running down my face, at the third world thing. If you can imagine fighting domestic violence (which is totally aided and abetted by the cops) in Nigeria, helping sex workers learn legitimate (and safer) work skills in Malawi, helping untouchable women who clean human waste with their hands in India (caste still exists despite being "illegal", and documenting the lives of indigenous (and otherwise totally invisible) people in Bolivia. And Tina Brown's blog is "important."

Each of these international bloggers is linked today in Mike's Blog Roundup at Crooks and Liars.

Yeah I'm not mad at all at Tina Brown, really, she is what she is.

I'm mad that a conference billed as designed to empower blogging women is really about Swiffer Jet. I've perused several of the mommy blogs of the Blogher network, and they are laid out professionally, have good spelling and grammar, and tell stories of suburban American women and their children, that are no less valid than stories of brutalized Malawi sex workers.

And frankly? I had a number of women at the conference come up and thank me for speaking the truth, as if it took guts or something. I'm so used to doing that I really don't feel the fear in the middle of doing the confronting. The shaking and mild depression and sighing hopelessness come later.

But I also sit there and think about a quote attributed to the Talmud:

Do not be daunted by the enormity of the world's grief. Do justly, now. Love mercy, now. Walk humbly, now. You are not obligated to complete the work, but neither are you free to abandon it.

Note: Thanks to those bloggers who've told me about the Women's Action in Media Conference in Chicago April 1-4 next year. If I can get childcare I'm going to try to go. (Maybe Tina Brown would like to babysit for free? I promise my kids are great consumers and would give her plenty of eyeballs, since I did take that Mr. Potatohead toy in the BlogHer bling bag.)
permalink 7:33 AM