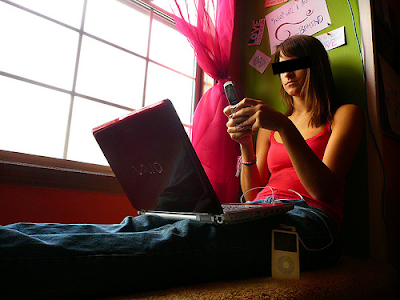 I'm not being glib here, this is really bad, and I woke up this morning fully intending to write about the FIFTY-TWO POINT TWO percent unemployment rate among young people. This is a problem. It's going to require political economic government socialist program action to fix it, particularly lots and lots of job training and with the boomers retiring that better happen right quick.

I went to Google News to find the story about the unemployment numbers. I had to dig and go through a Huffpo link to find this story. It's not on the front page of Google News, even. On the other hand, every single page I clicked through had a sidebar link to a story about the wedding of Khloe Kardashian (as one gossip site helpfully pointed out, "not the pregnant one") and some NBA star. And one sidebar had this lovely picture of the couple heading off to their wedding night abode: 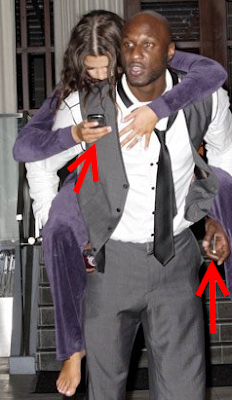 Oh, this is gonna be a really interesting wedding night, everything happening with one hand on an I-Phone and the E! cameras rolling. Congrats to Apple on their two BILLIONTH app download, btw. I have a feeling a few of those came from unemployed young people, poor things.

I don't want to turn into one of those old people who ramble on about "kids today," even though when I WAS 22 I lived on the first floor of a house with two roommates. One lived in the "living" room, the large entry way between "living" and "dining" was blocked over with bookcases so the second roommate could live in the "dining" room. So that we could have a common area, we sacrificed the third room and my bedroom was the back porch, no really. Nice big windows and the landlord had helpfully cut a hole in the drywall, removed the insulation, and installed a door so that it would count as a closet and therefore was in real-estate technicalities, a "bedroom." Window plus closet equals bedroom, did you know that?

When one of my roommates "forgot" to pay the power bill one winter, we put the milk in my closet to keep it cold until the power could get turned back on. I am not making that up.

We had no cable. And internet and cell phones were not in homes. Period. This was only 25 years ago, too.

And no offense to my wonderful parents, but I would have sold a kidney before I left Boston to move to western Pennsylvania to live "at home." The apartment porch chillspace WAS home. I think I was making about $210 a week and paying one paycheck for rent. I would not have had the money or the credit to pay a fifty dollar a month cell phone bill, even in 1987 dollars. These were not the good old days, not by a long shot. But pardon me if I don't bust a hernia about "lifetime earning potential" of any generation. Nobody in the real world measures money that way, and it appears a few "kids today" are not on the streets creating world revolution and protesting these horrible unemployment numbers and advocating for healthcare for all (which would be a huge full-time job creator for this generation, by the way) because

they're
too
busy
twittering
"I'm
bored."

Sorry bout that, whippersnappers, but hey, at least you don't have to go on Khloe's honeymoon. Kthxbye.

UPDATE: Here's a tweet on the subject worth reading.
permalink 10:08 AM