Whatever you do to Michele Bachmann... 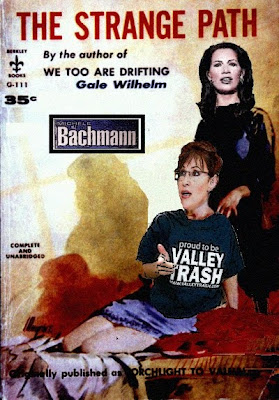 Don't Palinize her? I guess becoming a verb is a positive goal for the former Governor of Alaska. But then again, it automatically begs the definition, my version of which seemed rather popular amongst the Twitterati:

Bachmannize (v.) - to expose one's abandonment of all reason and intelligence in the name of wingnut ideology.

She claims I and other Democrats want to sabotage her? Oh honey. Are you KIDDING me?

I'm actually with Wonkette on this one: if Michele Bachmann wants to charge a day-fee for each time she opens her mouth, I'll buy the next three years up-front.

I'll send five bucks to her 2012 exploratory committee just to be on the mailing list. I swear.

I'll even dump any presidential-run hopes for Rick Santorum (now there's a dictionary word for ya) if only you'll announce, Congresswoman. You've now got that in writing. Love, Blue Gal


Original fabulous lesbian pulp fiction cover (I put Sarah in her t-shirt because I didn't think that subtext really added anything, ya know) here.
permalink 8:15 AM