Chuck Todd says we all need to look in the mirror.

Chuck Todd doesn't write everything, or perhaps anything, in NBC's "First Read" but he tweets about it from his five-bar DC Blackberry.

And this morning's is full of Villager false equivalency, that everyone's rhetoric is equally to "blame" for the shootings this weekend.

And the money quote:

"Of course, this all brings us to Sarah Palin..." Full quote below, emphasis mine:

The spotlight on Palin: Of course, this all brings us to Sarah Palin. What took place on Saturday in Arizona could end up haunting her, if she decides to run for higher office. More than any other public actor, Palin -- the 2008 GOP VP nominee -- has embodied today’s combative political rhetoric (“Don’t retreat, instead reload), and her “target” list to defeat Democratic members who voted for the health-care bill (including Giffords) has received a considerable amount of attention since Saturday. As Politico’s Martin writes, “Whether she defends, explains or even responds at all to the intense criticism of her brand of confrontational politics could well determine her trajectory on the national scene—and it’s likely to reveal the scope of her ambitions as well.”

Great look in the mirror there. 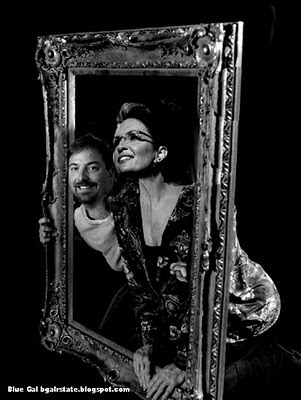 I've said it before: any media person who mentions Sarah Palin's name and does not include

FULL DISCLOSURE: WE'RE TALKING ABOUT HER TO GET RATINGS AND INCREASED HIT COUNTS. OBVIOUSLY THIS WOMAN HAS NO QUALIFICATIONS TO HOLD PUBLIC OFFICE.

is shitting on the future of the United States of America while hiding behind fake journalistic neutrality.
permalink 12:36 PM