The Real Problem This Weekend 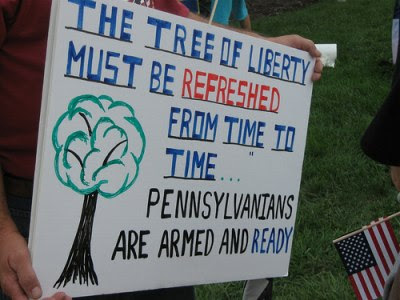 The left side of the spectrum, of which I am a part, gets hot under the collar and says fuckwad and fascist and many many other nasty words to describe their opponents.

We do not have a gun fetish at the core of our party's base.

The real, hard, cold, problem at the heart of this Saturday's tragedy is a fully-loaded, concealed, semi-automatic handgun in the hands of a seriously crazy young man.

And there is ONE party, one political base, that encourages gun ownership and tantrums over any attempts to temporize their gun fetish under the law.

There is ONE party, one political base, that looks to gun ownership as a sign of leadership. From the RNC Chairman debate of two years ago:

There is ONE party, one political base, that endorses carrying guns as a way to signal political disagreement.

There is ONE party, one political base, that has leaders who tout "second amendment remedies" as a solution to "tyranny" when elections don't go their way.

And yet, there are reports that the shooter on Saturday was motivated by "fighting tyranny" and some vendetta against NASA.

How many "second amendment remedy" Nevadans are today saying "but HE'S crazy!"

No one is crazy to use a second amendment remedy UNTIL SOMEONE DOES. And if there's a 9 year old in the concealed, semi-automatic crossfire, well...

scrub your website. And shriek real loud that the assailant was crazy, and a leftist because he owned copies of both Mein Kampf and The Communist Manifesto!!! No mention that he was a recent COLLEGE STUDENT, probably taking an intro poli sci course to get ready to "fight tyranny with his second amendment rights."

There is ONE party, one political base, that has a serious problem every time there is a politically charged shooting in America. And then we talk about RIGHTS, rather than MURDER.
permalink 12:24 PM