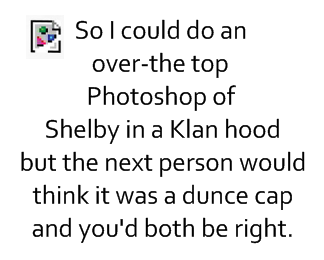 Yeah, TPM already has this story, let me just add how happy I am to have Roland "Fucking Corrupt" Burris as my [temporary] Senator instead of this jackass. Politics is so often the choice between two evils, but given that choice, I'll take the crook over the idiot every time.

This at a meet-the-constituents event, where some "natural born citizen" of the United States, um, prompted the Republican Alabama Senator to be more publicly stupid than usual.

Another local resident asked Shelby if there was any truth to a rumor that appeared during the presidential campaign concerning Obama’s U.S. citizenship, or lack thereof.

“Well his father was Kenyan and they said he was born in Hawaii, but I haven’t seen any birth certificate,” Shelby said. “You have to be born in America to be president.”

Setting aside the whole "they said" bullshit, who knew Shelby was bilingual? He seems to speak English very well for someone whose NATIVE language is Klanese. And, by the way, everyone in that formerly whites-only, betcha, restaurant, knew the code. What does "born in America" really mean, Senator?

According to the Associated Press, state officials in Hawaii checked health department records during the campaign and determined there was no doubt Obama was born in Hawaii.

Well, yeah, but does Hawaii really count? You know, even Cokie Roberts thinks Hawaii is kinda, you know, exotic. And pass the pork rinds, we all know what THAT stands for.

And hey, when Obama was born in 1961, that's before the Civil Rights Act.

"They said" you had to be white to vote in Alabama in 1961. You remember, don't you Senator? The good old days?

And then there's that whole Obama's white mother thing. I mean, what's worse that being, um, a pure-blooded "exotic" "Kenyan"? Really Senator, I gotta laugh so I don't cry. While federal law trumped the state in the 1960's, the Alabama state constitution was not amended to allow blacks and whites to get married until...wait for it...

Shelby will get re-elected anyway because the R after his name means he doesn't kill unborn white babies. Seriously. Alabama, I didn't leave soon enough.