I've had stuff coming to my email box this weekend which share a common thread, maybe one only I can see, but...

One email from a fellow blogger who is unhappy on lots of levels with Obama. I can see some of the points and others not so much. One issue is the worship of Obama by some of his followers. My first thought is that it is human nature to want to have an Obama or a Jesus or a Hitler or whatever come and save us in times of deep national despair. We really truly do have to watch out for that; people thought Nixon was "the one" in 1970 for crying out loud. I file Obama mania under "forgive them for they know not what they do" and pray that I can stay awake and not go for the cult of personality stuff.

She's a virgin, all right. Anyhow, Jane Hamsher in Huffpo is going after Obama for the bipartisan stuff. Yep, it's a rookie error, though I don't think he's going to change his process-above-all personality even over the jobs bill. (That's what we're calling it now, btw). Several Hillary supporters wanted to warn me during the primary that Obama was not progressive, and more than once I had to answer, duh!

In case you haven't noticed, the 2008 election isn't over yet. We're still running against McCain, to give one nasty for instance, and every southern white blowhard a-hole senator who was lucky enough NOT to have to run for re-election last Fall. Take a look at the map of where the Senate races are in 2010. 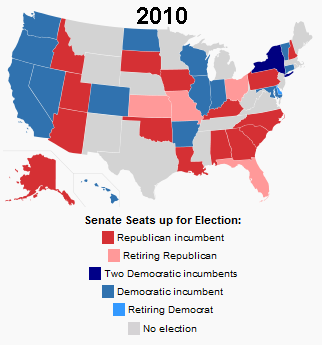 And if you think to tell me it's too early to discuss those races and we can't possibly live in perpetual campaign mode, I've got two names for you: Jim DeMint and David Vitter. They're up for re-election in less than two years, folks, and their seats aren't considered safe. In fact, every deep south state except Mississippi has senate elections in 20 months. And there are a lot of new black voters in those states who might be inclined to turn out if

In the meantime, it's not that I am too cool to talk about the Democratic primary season of 2008, it's that I'm too busy. I'm busy supporting spending on whatever will get America back to work, AND I'm busy getting geared up for Blog Against Theocracy, where I may seriously knock horns with the President for whom I voted. I'd like a little faith-based kickass against the GOP for the 2010 elections from this President, too. It's not too early.
permalink 11:31 AM