How Country Music is Sarah Palin willing to go?

This cracked me up:

It was an unscripted moment on Sarah Palin's tour to promote her new book, "America by Heart." As hundreds of Palin's fans filed inside a cordoned off area of a northern Iowa Walmart today, this CNN crew popped the question asked of countless potential White House contenders: "Are you any closer to an announcement on running for President?"

The country music that Palin's handlers had blaring at the signing station presumably to drown out such questions suddenly stopped. We asked the question again.

"Am I doing interviews?" the former Alaska governor asked. "I thought I got to talk to the nice people. And where's our music and where's our good enthusiasm?" she persisted.

A WALMART?  IN IOWA?  And they have to ask the question?  She wants the blaring country music and only talk to the nice people!

But how country music is she willing to go?

Careful Quitty!  Newt is willing to go full Porter Wagoner on your ass. 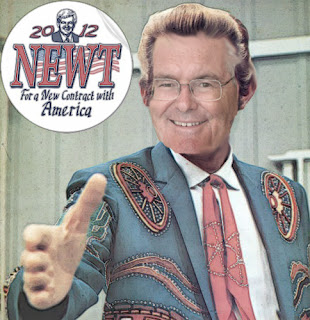 PS.  While we're still keeping count, she also lied to Barbara Walters, who asked her about critics accusing her of losing the Senate for the GOP.  I'm not talking about the "impotent and limp" thing, either.  Hey, if her instinct tells her to talk about cock to keep people interested in her I can't argue.
But the Grifter has to be careful when she says they're mostly anonymous critics who say things against her.  Congressman Spencer Bachus (who said the "she lost us the Senate" statement on the record), Joe Scarborough, and Karl Rove are not anonymous critics.  Neither are the majority of Republican primary voters who think she's not qualified to run their PTA meeting.
permalink 10:34 AM

Email ThisBlogThis!Share to TwitterShare to FacebookShare to Pinterest
Labels: "Sarah Palin is such a goddamn fuckwad"