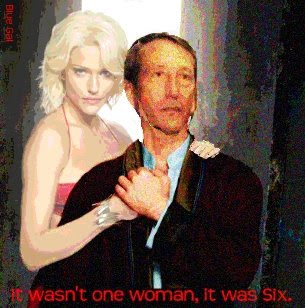 Honestly, Governor Mark Sanford has been watchin a lil too much BSG. Gaius Baltar is not someone you want to emulate, Sanford. His blind love for his own pee-nee destroyed the entire planet Earth. But Sanford clearly thinks that the season must go on with his own indispensible space soap opera character. Like he can't be cancelled. Or something.

Admitting to more meetings with the Argentinian and then 'clarifying' that there were other women but you didn't go, what, past second base with any of them? Third? Please don't tell me you've told yourself the whole Clinton/Gingrich "sucking isn't sleeping" canard. Women, especially, are really fraking sick of that one.

In possibly the mother of all reversals, Gaius Baltar was but a step from being airlocked when he was miraculously acquitted of crimes against humanity. Set free aboard Galactica (and quite reasonably fearing for his life), Baltar was taken in by a commune of beautiful, nubile, adoring women who saw to his every need (every need) and worshipped him like a Messiah.

Baltar found this arrangement as perplexing as it was delightful, but quickly reinvented himself as a prophet, in order to remain safely under the protection and amorous care of Jeanne, Tracey, Paulla, and many, many others.