So much 'sex in advertising' crap has come across my computer screen in the past 48 hours (not to mention a certain Nevada Senator and his defense of marriage/affair with staffer, don't get me started) that I really have to respond. 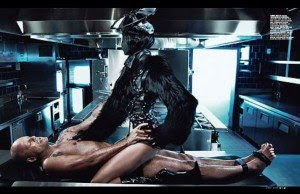 Dear Mister Willis: You dressed Chris Tucker in your vehicle 'The Fifth Element' in sexier clothes (via Jean Paul Gautier) than you do your new wife in W. Here's proof: 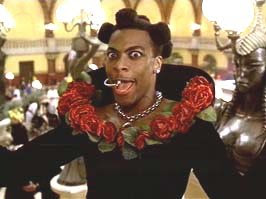 It's boring because it's commerce rather than carnality, which means it is expressly designed for the public space and public sphere, something that is the opposite of illicit sex. If someone gets sexually excited by doing something illicit, shocking, and unacceptable to polite society, they will NOT do that thing on a five foot high billboard. That ruins the fun. We are not seeing Bruce and Emma's private honeymoon photos in W. That's perhaps the fantasy they were going for, but really. Who packs Fox fur? (Don't answer that. Furries can go with God and all that, but sex with animals is not what He in His Divine Wisdom had in mind. Nevermind Nevada Senators, don't get me started about those poor horses.)

But if Bruce and Emma are actually exhibitionists, this would still not be the result. Face it, to slake their thirst for real exhibitionism, they would have 'leaked' actual honeymoon sex video to some sleazy celebrity scandal website (no link but you know the one, dahlink) and the lighting would have been terrible and Alexander McQueen would have asked for his made-to-order harness back. Instead we have a "spread" designed to create [blog] buzz for a printed magazine, and look, it succeeded.

All of this reminds me of a wonderful New York Times review, entitled "The Empress has No Clothes," (good writing and germane to my argument; go read the whole thing) for that "Sex" book Madonna came out with several years ago. I never forgot the tagline Caryn James came up with for the book: 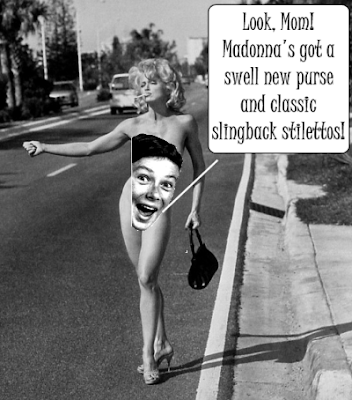 Email ThisBlogThis!Share to TwitterShare to FacebookShare to Pinterest
Labels: "this is not a sex blog", advertising