We Need More Retirements in the Congress, Not Less 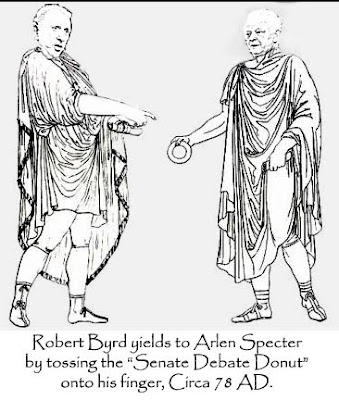 I certainly understand the collective whine coming from us progressives over the "loss" of Senators Dodd and Dorgen. But look, both of them have birthdays in May: Dodd will be 66 and Dorgan 68. When are these guys supposed to retire?

We've got the oldest US Senate in the history of forever. Forty-eight US Senators are over sixty-five, and twenty-seven of those are over seventy.

I don't want anyone to think I'm being ageist here, though I actually think it's an ageist thing on the part of boomers to keep these (pardon the expression) fossils in office. One always feels younger if the leadership of your country is older than you. A large part of the susceptibility of seniors to distrust Obama has to do with him being in his forties, I'm sure.

And why would a body of (mostly) men who continue to get Federal Employee health insurance see the urgency of a Medicare buy-in for people under sixty five? Hell, Senator Grassley (running for re-election and he'll be 78 in September) told a constituent flat-out last June that if he wanted a good deal on health insurance he should become an employee of the federal government. No, really:

I think we need more members of Congress to retire.

Sure, like a lot of progressives I would miss Bernie Sanders (68) and Jay Rockefeller (72) and Barbara Boxer (69). But I certainly don't think there aren't progressive candidates available to run and serve in their place.

The Democrats in particular should be ashamed for needing to wheel Robert Byrd (ninty-effing-two) into the chamber late Christmas Eve for a sixtieth vote. If Joe Lieberman (67) can fake-filibuster without actually lifting a finger or pulling out a cot, Byrd should be able to vote "aye" from home.

The argument for incumbency benefits only the two political parties and the advertising reps and consultants who make running for office a million dollar business. Screw them and their self-preservation. As Chris Dodd said yesterday, "None of us is irreplaceable. None of us are indispensible. Those who think otherwise, are dangerous."
permalink 11:58 AM