And while we're on a controversy riff...

There was quite a bit of it over at the big blog over the use of this image, presented without comment, at last night's open thread. 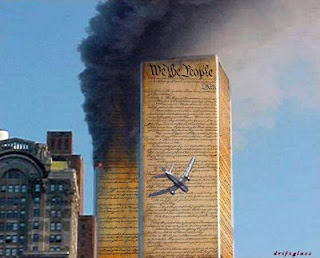 Some took umbrage, some defended it.

My two cents, and it isn't my image or my blog, is this:

If it were a drawing, no one would have said a goddamn thing. And that leads to a fifty-minute art history discourse on genre and medium which you will have to read elsewhere 'cause I sure ain't gonna write it.

There are some in the nation, and particularly in the liberal blogosphere, sad to say, for whom their own personal emotional reaction to any event, personal or not, must be displayed, celebrated, and fetishized in order to prove some point about sensitivity, liberalism, and rightness. I have very little time for that.

Nevertheless, some of the reaction to this was genuinely emotional, and appeared to come from people for whom 9/11 was more than a national tragedy. I expect those for whom 9/11 is a day of personal tragedy, spent it in quiet reflection, tears, and prayer. I would never be so callous as to suggest you surf or comment on the blogs or the television or the political cartoons on that awful anniversary. If your experience on 9/11/01 was in anyway a personal loss or a personal experience, regardless of whether you were there or lost someone (because "personal loss" is completely subjective), I am so sorry for that. There is also nothing any political blogger can say or do to assuage your feelings seven years later, or to offend your sense of loss.
permalink 8:45 AM