What we learned last night...

What we learned last night is that after 20 months they can't stand to look at each other. They also seemed very Senatorial to me, masters of the statistical blah de blah blah.

And of course Obama won. Even Republican pundits said so.

But the moment that struck me was when the gentlemen were comparing bracelets and trading perspectives about mothers sending sons to war. They didn't mention the women, the mothers, who have also died in Iraq. 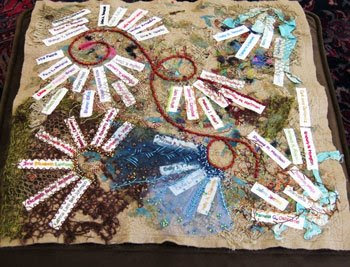 I had an opportunity last weekend to see the actual pieces from The Mother's Day Project. No photo can do them justice. Each white strip above has the embroidered name of a fallen woman soldier. If only the military had published names of fallen civilians.

A small aside: I don't use the "C" word that Mister McCain used on his wife on at least one occasion, but if I did, I would reserve it for people who call themselves feminists and then say supporting McCain/Palin proves that. That is all.
permalink 8:34 AM