I should probably keep my mouth shut. 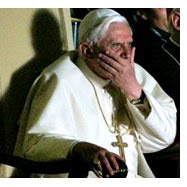 Pope Benedict and I should just plain mind our own business. But enough people have asked me, and hey, I have a blog, so I'm going to open my big mouth.

I think Sarah Palin is a bad mother.

I hate even thinking that about anyone. Palin is an idiot. I don't care how many people want me to paint her as 'smart'. She's also a compulsive liar, and has obviously lied to herself that she can do the job of helping McCain to get elected, too.

As the mother of a special needs kid, I can tell you that at the time of his diagnosis I would have cut off my own limb before taking ANY job that took me away from his care.

I was lucky at that time that I did not need to work. I feel horrible for parents who must work outside the home to pay for the care of a special needs child.

But Christ, she's got a Down's Syndrome baby. She has no idea if the baby has any Mental Retardation issues at this point. Special needs babies are ALL CONSUMING and SHOULD BE. It's like the only issue she had was making political points from not aborting. And then it's right back to work? Not even the standard six weeks maternity leave? Are you kidding me? To hell with her.

And her teenager is out underage drinking (driving?) and fucking (apparently on a webcam, oh lawrd) while the mommy is Governor of Alaska. Don't let them give me any "it's a rural area" bullshit. You don't have to raise a redneck underage drinker just because everyone else in your podunk state is. Teenagers need supervision and to be kept busy doing something productive and safe, and that is goddamn hard to do. That's why they call it "parenting", instead of "syrupy cupcakes with sprinkles". 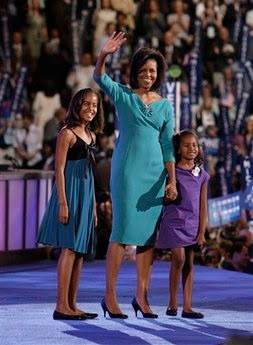 My guess is that Michelle Obama is going to have her daughters doing real community organizing at age, oh, eleven. And that any self-described "redneck" hockey player with a third of a bottle of rum and a digital camera will not have, ahem, any access whatsoever to the Obama girls.

Again, it's called parenting. You have a daughter, you protect her, even if she thinks you are a satanic bitch Nazi prison guard until she turns 22. That's okay by me, because I happen to be the meanest mommy in the whole, wide world.

But of course I didn't mention that Michelle Obama and I also have something called "class," which we hope to pass on to our daughters. Michelle seems to be doing okay on that one.

Governor Palin also has a serious, tragic, I would say clinical, lying problem. Not just about the Bridge to Nowhere and Troopergate. She is lying to herself. She has failed her daughter on lots of levels. I am very sad about that, but there, I said it.

BTW I wouldn't worry about Palin if she gets kicked off the ticket. After she implodes she'll have a Job-For-Life speaking at Crystal Cathedral type mega churches. That's what Ten Commandments Judge Roy Moore does now that his fellow Alabama Justices kicked him out.

Hell, if she can tone down her annoying voice she might even make it as a CNN Republican analyst, like Ralph Reed and Bill Bennett!!!
permalink 12:04 PM