"Eighty percent of success is showing up." - Woody Allen

It appears that he won't even show up for his own impeachment trial -- because there are no cameras, I suppose. Plus, he really, truly, doesn't know his way around Springfield, Illinois.

PS, Governor. I just realized I coulda saved a down payment if I'd just rented the unused Governor's Mansion from ya. We'd have to clear the dining room table to suit my family's needs, but the table you never eat at looks big enough for glitter glue projects AND macaroni and cheese: 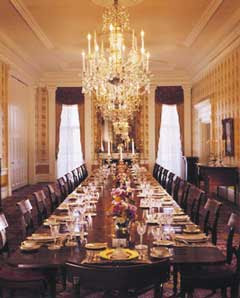 There's a lot of background on Blago and his unpopularity here in Illinois. He really did want to govern like Daley in Chicago, but of course he's not Daley and ahem, Springfield and the state of Illinois is not Chicago, though Blago wants to think it is.

I was gonna go to the trial and all but since the Illinois Senate website is not very forthcoming as to where and how to get in (score one for the Governor, he CAN say he got lost).

I'll probably try having lunch at Augie's or Robbie's and see if I can eavesdrop on any opinions there.

Also, he thinks he's too pretty to go to jail. Really.
permalink 9:15 AM