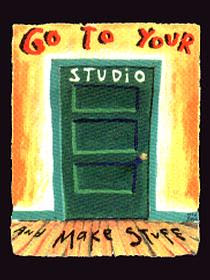 I used to have a shirt with this image on it. The shirt got absolutely tattered with frequent wear. Even now the message is a mantra with me. It's not my office, even though there's a computer and a couple of desks. It's my studio. It's where I make stuff. Sometimes it's knitting, sometimes sewing, occasionally a collage or sketch.

I think about this frequently as I hear the word "economy" talked about. The story of the hilariously failed job interview comes to mind, where the young woman, when asked why she wanted the job, said she loved to shop and since the office was close to the shopping district she could do more shopping.

Our economy has outsourced making things. Now we buy things. Proof that there is a problem: the proven-right prediction of a 2007 recession impelled our last President to suggest that we "go shopping".

This President isn't doing that.

What, shopping isn't gonna fix my world? Dang, I have to go SHOPPING for a t-shirt in protest! 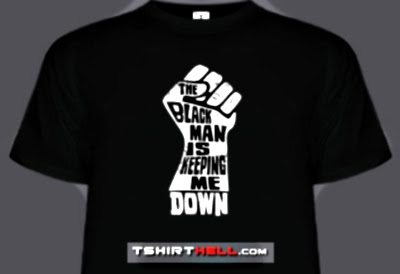 I hope that as more and more of us lose our jobs and things seem as bleak as they do, that we are able to frame this time as an opportunity to give and make sacrifices, as citizens clearly did during World War II. But as I heard the new President's (yay!) speech yesterday, part of me despaired that we would instead fake ourselves out as we did during the energy crisis of the seventies. Jimmy Carter's "moral equivalence of war" over reducing energy consumption was derided (m.e.o.w. said Safire) but it was Carter who created a Department of Energy and even the concept of "energy policy." And Carter's presidency was a failure, they say.

I worry that we have given up the idea of "making stuff," when manufacturing is STILL such a critical part of our economy. Wouldn't it be nice if Obama was able to arrange for the Big Three auto makers to manufacture wind turbines, rather than WAIT five decades for the CHINESE to catch up with world demand, as we are now? Fuck.

Oh look, Obama's been President for one day, one hour, and forty-two minutes, and I get to say Fuck. Honeymoon's over! Ha ha ha lol!

Allow me to say I don't expect federal grants or bailouts for bloggers. Not in my lifetime. But writing for publication is making stuff, and those of us who do it are worthy of our hire.

In other words, don't ask me to blog for you Arianna, unless you are willing to put FOOD ON MY TABLE. Hit counts don't feed the three kids, Missy.

That said, apparently you're reading the blog of the Arianna Huffington of central Illinois. Blue Gal organized the party last night (and led the toast to the new President yay!) for Drinking Liberally/Move On in Springfield: it was a great turnout and lovely time had by all. And I can't remember another night where I had a third beer, ever. Thanks for coming out (and btw I learned last night that any time a blogger leaves her laptop to meet actual human beings that turns slacktivism not activism. Something Arianna figured out long ago.)
permalink 12:04 PM