It IS an honor to be nominated

But when you look at the competition in terms of overall stats, it's pretty obvious I'm the little gal in this competition for "best liberal blogger". 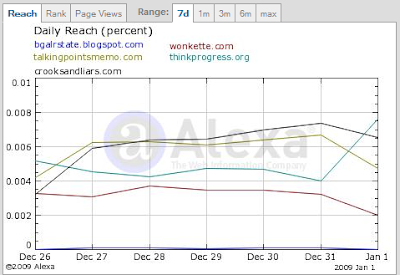 The blog you're reading right now (thank you) is that blue line hovering at the "zero" mark. This chart only allows me to select five blogs at a time, so it shows the biggest blogs with which I'm nominated.

I think the organizers of the Weblog Awards figured that putting my blog in an audience size category, which I won in 2006, would be unfair to the competition. So they ranked me with the big boys, which is a real honor. I'll hang out here happily knowing that the bling will likely go to those with bigger traffic.

My blog has never had a business model and I have no interest in spending time I could be writing working on driving up traffic. I'm also impressed that there are some very big liberal blogs out there that were not nominated. I take the nomination as a tremendous compliment and testimony to the quality of this blog and its writing, and I'm very grateful.

I may give the big boys a run for their bling anyway, if the small bloggers I've helped over the past four years show their support at their places. That's already started and it really touches me. Thanks again.

And if I go home empty-handed this year, I can be like Jim Morrison after they screamed at him for misbehaving at the Ed Sullivan Show, and told him he'd never be on Ed Sullivan again. "We did Ed Sullivan." I've won a weblog award. Ha.
permalink 9:15 AM