Maybe it's 'cause I turned Quaker... 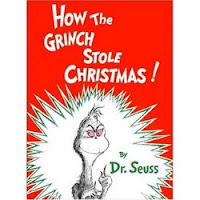 Visiting this weekend away from home and my children have access to television, nay not just television but cable television. But we made the most of it by watching (the two younger ones for the first time) The Grinch Who Stole Christmas, the old Boris Karloff narrated cartoon.

I've always thought that Cindy Lou Who and her cohorts didn't know the real meaning of Christmas until their stuff was stolen. And that it was their hearts that were changed, off-camera, more than the Grinch's.

Today I noticed for the first time that what the Grinch hates most about Christmas is the "noise, noise, noise." And that his heart is changed when he hears quiet heartfelt singing, rather than noise. And when he participates in Whoville Christmas after the transformation of everyone there is a calm quiet dinner rather than noise.

Perhaps it's just the Quaker in me. But I'm going to find some quiet this week.

I've just listened to about 40 versions of this song, wouldn't recommend the Britney version, ha, but this old opera singer, who died on Christmas day two years ago, does it done good: