Several people have either tagged me or threatened to tag me with the Splotchy Story Meme. I don't want to leave anyone out. Here's my version of the story, which, sorry, I think is complete on its own. I know, I know, that does not really allow for viralness, but since I don't tag others anyway, viral wouldn't come from here anyhow. 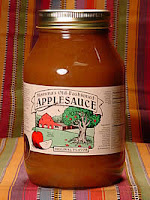 There is tremendous danger in posting a story like this, in that many readers will read more into it than is there. Allow me to say this as clearly as I can: No one ever threw a jar of pickles or applesauce in my kitchen. Please don't look for some key to my experience in a story I wrote and present to you as fiction.

[A big thank you to the gentle reader who took a look at this before I posted it.]

I woke up hungry. I pulled my bedroom curtain to the side and looked out on a hazy morning. I dragged myself into the kitchen, in search of something to eat. I reached for a jar of applesauce sitting next to the sink, and found it very cold to the touch. I opened the jar and realized it was frozen.

I also knew why it was there.

It was the same brand and size as the other jars, usually six or seven, he had stored in the refrigerator. On the top shelf, so I would see them every time I made dinner or got milk or pulled out a snack for one of the kids. They were his weapon of choice, his muse, his sword, his paintbrush.

He had thrown a jar of pickles once, just once, when dinner was a packaged casserole and he wanted homemade meatloaf. He said later it was a compliment to me, and my cooking, that he would much rather have what I made than something from Stouffer’s. So he threw a glass of pickles against the wall, to show me that he really appreciated me and my cooking.

I cleaned up the pickles and broken glass, wiped up the stinky juice as quickly as I could. Too quickly, it turned out. 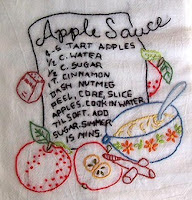 That was when he decided on applesauce.

It splatters up the wall, spreads on the floor, conceals the smallest glass shards. The sticky residue endures, forever, to the stucco on the kitchen wall. It takes a long time to clean. He watches. Stands over me and says you missed a spot here. The floorboards will be ruined if you don’t move quickly, and it will be your fault.

At least, that is what he did before the neighbors reported the noise, and the police came, and there was a restraining order…before I thought I was free.

Frozen applesauce in a glass jar. Very clever. As the applesauce melts the frozen glass warms too quickly and shatters. But not yet. He did not need to make a sound. Did not need to wake me in case I would call the police. He has been in this kitchen within the past two hours, I suspected. He might still be here. He thought I would sleep in, maybe. He thought I would awake again to broken glass and the smell that makes me so ill I could retch even now. And what do I say to the cops? “There’s frozen applesauce on my kitchen counter, arrest him?“

Sure enough, just as I get it above the trash can the bottom of the jar falls off. I drop the rest in and thank God none spilled anywhere else. I am able, quickly, to put two unsorted baskets of clean laundry in the back of the van, get the girls out of bed and for a moment I debate: do I take them to the toilet to empty their bladders before we go? Do I risk it? Yes. I am able to buckle their pajammied bodies into their seats.

I am able to drive.

I am able to drive.

I have nowhere, nowhere, to go.