Caroline Kennedy: We Don't Care To See Your "O" Face

Whether you feel she is qualified or not, there's no arguing that it's about ficking time someone called the media on their "handling" of women in politics. Caroline Kennedy deftly hands two NY Times reporters their gravy sacks:

"Have you guys ever thought about writing for, like, a woman’s magazine or something?" she asked them. "I thought you were the crack political team."

Of course, now she'll have to make it up to "women's" magazines: 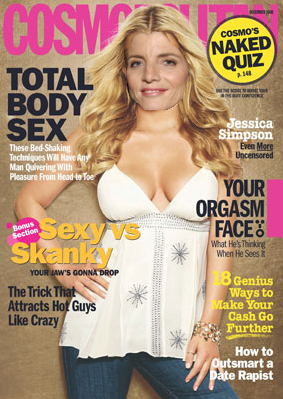 Oh nevermind making it up to the women's mags, Mrs. Schlossberg. Every title on the magazine cover is for real. Yes, "The Trick that Attracts Hot Guys Like Crazy" is right there with "How to Outsmart a Date Rapist."

Don't get me started about "Your Orgasm Face: What He's Thinking When He Sees It." If I had to worry about such things, Cosmo, I wouldn't be in bed with him AT ALL, let alone enjoying it. Tremendously. As I said, don't get me started.