Wherein I write a personal,
yet publick, note to My Captain. 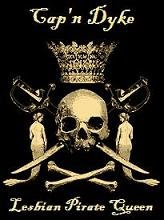 I were thinkin' on ye, Cap'n, this morning, as I read the blogs and discovered what is possibly the lamest article ever written at Huffington Post. I know, Cap'n, that be an astonishin' claim, but you will consider the evidence:

The "lady" writin' this, whose name be Alex Leo, sayeth that when models in advertisements appear as pirates, that is an example of "rape" being used in advertising to subjugate women.

And, well Cap'n, I hope you are sittin' down for this one...

I know I am just your blogmistress (and not a lesbian though I be a pirate raisin' my children t' be the same) and should probably keep my business above deck, but if you'll harbor a suggestion, I suggest you and some of your fine crew take Miss Leo (I be presumin' she is single, and who wouldn't?) below decks where the ropes and other piratical girl-on-girl paraphrenalia be, and show her a really good time away from cameras and advertising and fake feminist outrage.

And once she's had twenty or thirty bits o' fun, a warm bath and a long nap, turn her loose and she won't want to leave and you'll allow her to stay, provided she promise she won't write silly stuff like that ever again.

And while I be makin' suggestions, Cap'n? I be givin' a hat tip to Jade Gate on this one, his blog be not safe for work, but he is a master of the ropes, a true gentleman who only acts on explicit consent from women, and would be an asset to any Pirate Ship.

PS folks too friggin cold to do a video blog my cheeks are beet red from getting the ice chipped off of my car, which took...blah blah blah. Salon tonight, though.
permalink 9:21 AM