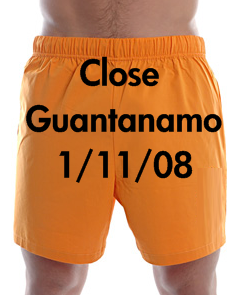 ...wear orange day. In solidarity with those who have been held by our country for six years without charge and without trial.

The ACLU has kindly provided us all with a sample blog post but frankly I don't think anyone around here needs that either for writing or reading.

Guantanamo is not a country club prison, and the prisoners there are unnumbered and unnamed to the public. For our safety.

But it is a symbol. And it needs to be stormed, electronically and politically but we revolutionaries use what we've got. Shut down Guantanamo means live up to the Consitution of the United States as you swore to when you were inaugurated...aw fuck it. He won't. But we will continue to fight him and use the symbols at our disposal to show the wider world how wrong this whole country is right now.

Played "Bastille Day" by Rush while writing this and it's a good soundtrack for outrage.

Email ThisBlogThis!Share to TwitterShare to FacebookShare to Pinterest
Labels: "Bush is such a goddamn fuckwad.", "stating the obvious", activism, do justice, just itchin' for a fight with these people, pray without ceasing, this is the fucking revolution people