Closing Guantanamo, one cell at a time. 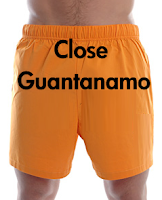 Five of six Algerians must be released after nearly seven years of captivity at the U.S. military prison at Guantanamo Bay in Cuba, a federal judge ruled on Thursday in a setback for the Bush administration.

U.S. District Judge Richard Leon ruled from the bench after holding the first hearings under a landmark Supreme Court ruling in June that gave Guantanamo prisoners the legal right to challenge their continued confinement.

U.S. President-elect Barack Obama has promised to close the prison camp after he takes office in January. Meanwhile, U.S. judges in Washington are moving ahead with case-by-case reviews of about 200 detainee legal challenges.

Reading his ruling as the detainees listened in Guantanamo via a telephone hookup, Leon said the U.S. government failed to show the five detainees who had been living in Bosnia had planned to travel to Afghanistan to fight against U.S. forces.

Why do I suspect the U.S. Government never intended to show evidence in these cases? That the source of any supposed evidence could not be admitted in court?